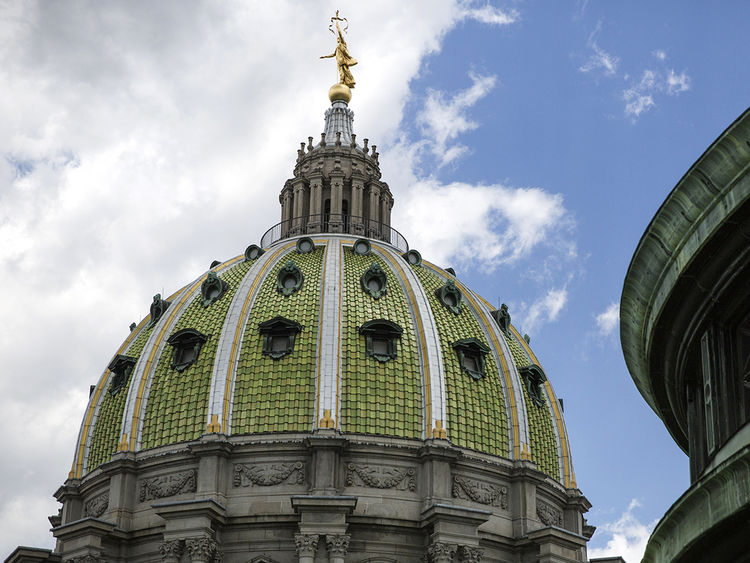 Penn State students traveled to Harrisburg to connect with their elected officials to share their stories of the many ways Penn State benefits the commonwealth as a 21st century land-grant institution.

ABINGTON, Pa. — Penn State Abington students traveled to Harrisburg on March 30 to appeal to legislators for an increase in the University’s annual state appropriation, which supports a tuition break for Pennsylvania residents and Penn State programs that have statewide impact. They were joined by about 80 others from the University for the annual Advocate Penn State Capital Day.

The Abington students told lawmakers about the impact of the Penn State experience on them and their families.

“I shared the importance of funding to Penn State, as it brings affordable higher education to lower income students who ultimately give back to the economy upon graduation. I also got a chance to present my own Penn State story and what Penn State means to my family and me,” the sophomore said.

Patel chose Penn State because it combined affordability with opportunity.

“I am the first one to attend Penn State in my family, and no one quite knew how affordable, how close to home, and how many opportunities Penn State provided until I attended,” Patel said. “My family saw Penn State ease the financial burden for higher education as a low-income household to the extent that they encourage my siblings to bleed blue and white as well. Penn State's community represents family and home to me.”

Patel said the day broadened her perspective on the possibilities afforded by self-advocacy.

“As students, we have the power to represent ourselves in front of important people such as our politicians to advocate for what we want for our education,” said Patel, a finance major. “It is vital to participate, as it will help the next generation. All students that engaged in Capital Day had one shared goal in mind: to leave Penn State a better place than they found it.”

Brett Duffey attended Capital Day through his role as a voter engagement specialist for the student organization Penn State Abington Votes. He and an SGA member met with an aide to state Sen. Robert Tomlinson.

“We expressed our desire that funding to the University be increased to keep tuition manageable for low- and middle-income students,” said Duffey, a business major.

“State funding to the University is imperative to continue to keep Penn State's reputation as a highly regarded and an affordable school to attend,” he added. “Students come from all walks of life, all backgrounds, and several countries, but they all have one goal in mind: to further their education at one of the best state universities in the country, Penn State.”

I shared the importance of funding to Penn State, as it brings affordable higher education to lower income students who ultimately give back to the economy upon graduation.

Advocate Penn State Capital Day was scheduled this year with a limited in-person portion at the state Capitol in Harrisburg and a virtual advocacy component that was open to the entire Penn State community. Penn Staters from across the University were encouraged to contact their elected officials to share their stories of the many ways Penn State benefits the commonwealth as a 21st century land-grant institution.

Sponsored by Advocate Penn State and Penn State’s Office of Government and Community Relations, the event serves as the University’s largest single-day advocacy event. Past iterations of Advocate Penn State Capital Day have been beneficial in securing the University’s annual state appropriation. Advocates are hoping to obtain an increase in state support for 2022-23, as Pennsylvania Gov. Tom Wolf has proposed a 5% increase to Penn State’s funding.