According to Ron Mallett, professor of physics at University of Connecticut, the question isn't whether time travel is possible, but instead when it will happen. On Jan. 28, at Penn State Abington, Mallett spoke to a standing-room-only crowd and captivated the audience with the story of his life-long quest to build a time machine -- a science-fiction tale based completely on physics and even proven in theory.

Mallett is no stereotypical mad scientist who mumbles Einstein's Theory of Relativity and physics jargon to a room full of science geeks. Equal parts showman and scientist, Mallett entertained the crowded room of students, faculty and staff with humor, stories, charts and cartoons -- making the complicated world of physics understandable to the average Joe.

Mallett's story begins when he was a young boy growing up in the Bronx. At the time, his father was larger than life to him.

"He was the center of my life. He spent a lot of time with me. I loved him dearly," reminisced Mallett. When Mallett was only 10 years old, his father died of a massive heart attack at the age of 33.

"My world was destroyed," said Mallett. "I became a very depressed kid; my life was turned inside out."

About one year after his father's death, a book saved Mallett from the depths of depression. After reading H.G. Wells’ novel "The Time Machine," Mallett became focused on one goal: to build a time machine so he could go back in time to see his father again and warn him about his impending heart attack. From that point on, Mallett embarked on an education and career in physics that would hopefully bring him closer to reaching his goal.

Mallett earned all of his degrees at Penn State, including a master's degree in 1970 and a doctorate in 1973, and now teaches at the University of Connecticut. Mallett is well-respected among his peers for his ground-breaking research.

Based on Einstein's work, Mallett has developed a time travel theory using light. In layman's terms, if light can create gravity, and gravity can affect time, then light can affect time. He hopes to prove this theory in the lab by using laser lights and reflective mirrors.

In a recent research development, Mallett is now getting help- -- man power as well as funding -- from his alma mater. The Penn State Electro Optic Center located in Pittsburgh is collaborating with Mallett to test the first part of his theory -- the gravitational effect of light.

Mallett continued to mesmerize his audience with time travel topics and theories, from black holes to worm holes, from space twisting to the twisting of time, from the Grandfather Paradox to the possibility of parallel universes.

Since part of Mallett’s theory is that information, not humans, would be the first thing to travel back in time, an audience member inquired about the content of that very first message. Smiling broadly, Mallett enthusiastically surmised it would read, "It works!"

So fascinating is Mallett's tale that Hollywood movie producer, Spike Lee, bought the rights to his memoir, "Time Traveler: A Scientist's Personal Mission to Make Time Travel a Reality." The script is in "active development," according to Mallett -- intriguing the audience once again with the question of what Hollywood actor will play Mallett. "More importantly," asks Mallett, "is who will play my father?" 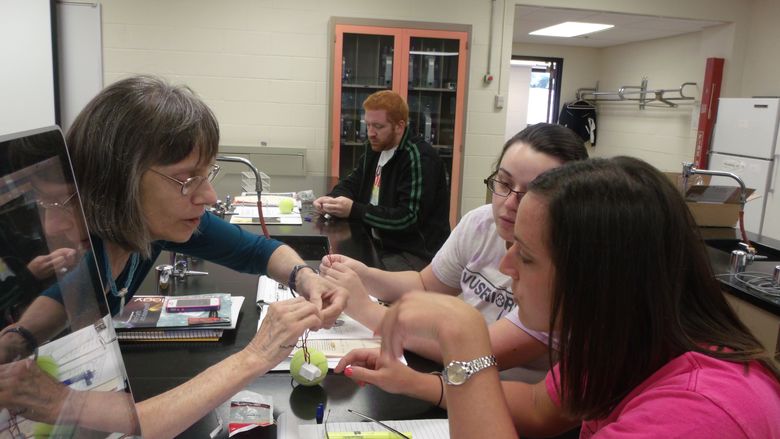 Astrobiology course at Abington opens up new worlds for educators