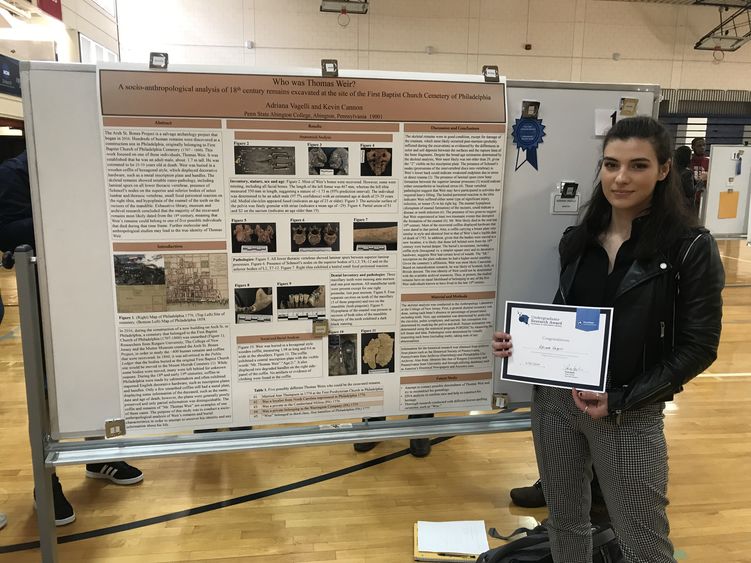 “It was about graves from an old cemetery accidentally being dug up in Old City (Philadelphia),” the Penn State Abington senior said. “They wanted to identify the people who were buried there. I was interested and wanted to get involved.”

The remains and coffins were being evaluated by a team of volunteer archaeologists from Rutgers University, the Mutter Museum of Philadelphia, and the College of New Jersey, who dubbed it the "Arch Street Project." Vagelli contacted the Rutgers professor who was leading the investigation, and she was invited to join the group.

Vagelli’s award-winning ACURA (Abington College Undergraduate Research Activities) and her Schreyer Honors College thesis were born out of this salvage archaeology project at the former burial ground of the First Baptist Church of Philadelphia. 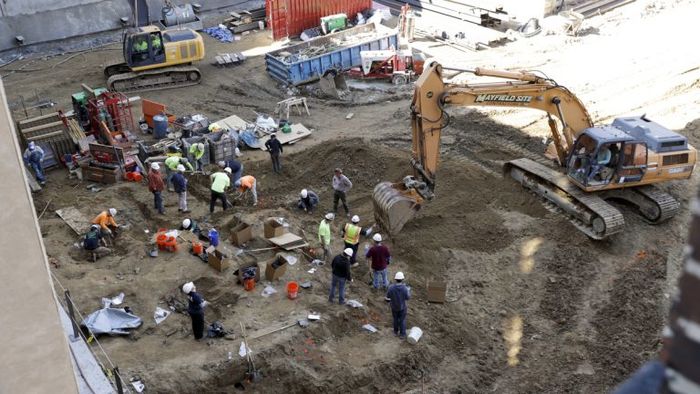 Workers excavate the site of the former cemetery in the Old City neighborhood of Philadelphia in 2017.

Vagelli, who worked with the team out of a warehouse in New Jersey, focused on the remains of a man named Thomas Weir.

“The purpose of my study was to conduct a socio-anthropological analysis of Thomas Weir’s remains and burial characteristics to uncover information about his life,” the biology major said.

Exhaustive library, museum and archival research concluded that the majority of the excavated remains most likely dated from the 18th century, “meaning that they could belong to one of five possible individuals named Thomas Weir who died during that time frame,” Vagelli said.

Since most of the recovered coffins displayed hardware that dated to the mid- to late-18th century, it is likely that Weir died during that time period. In addition, a coffin carrying a nameplate very similar in style and identical in font to Weir’s had a legible date of death of 1782.

The first step in Vagelli’s research was a general skeletal inventory, noting each bone’s absence or percentage of preservation, including teeth. Next, a skeletal analysis was conducted in the Anthropology Laboratory at the College of New Jersey. The sex estimate was determined by studying the pelvis and skull.

Most of Weir’s bones were recovered, although the facial bones were missing. The skeletal remains were in good condition except for damage to the cranium that probably occurred post-mortem, most likely during excavation, as evidenced by the differences in the color and soil deposits between the surfaces and the rupture lines of the bone fragments. 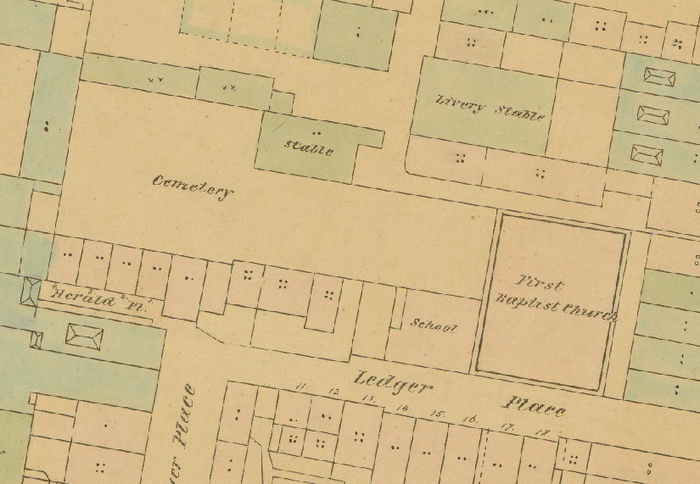 An 1858 map of Philadelphia that includes the site of the cemetery.

What did Vagelli learn about this Thomas Weir? He was an adult male about 5 feet 5 inches tall, which was determined using the statistical program FORDISC by measuring the left femur and tibia.

He was between 23 years old and 39 years old at death, said Vagelli. The age estimate was determined by analyzing the clavicles, pubic symphyses, and the sacrum. Despite the broad age estimation determined by the skeletal analysis, Weir most likely was not older than 29 given the “2” visible on the nameplate on his casket.

Pathologies were determined by visually inspecting each bone including teeth, taking note of any abnormalities. His skeletal remains showed notable osteo-pathology or bone disease. Weir’s dental inventory determined that three teeth were missing before death and one was post-mortem, according to Vagelli. The disruption of enamel formation of the incisors could indicate a disease or tooth infection.

The presence of protrusions of the intervertebral discs into vertebrae in Weir’s lower back could indicate weakened endplates due to stress or direct trauma. Indications of osteoarthritis vertebral pathologies suggest that Weir may have participated in activities that required heavy lifting.

In addition, Vagelli reported, an area showing healing in the right tibia indicates Weir suffered either some type of significant injury, infection, or tumor in his right leg.

During the 18th and 19th centuries, coffins in Philadelphia were made by cabinetmakers and often exhibited imported English decorative hardware such as inscription plates and handles, said Vagelli. Only a few of the unearthed coffins still had metal plates displaying some information such as the name and date and age of death. The plates were generally poorly preserved and only partial information was distinguishable.

The coffin and remains of Weir are examples of one of these cases, explained Vagelli. Weir was buried in a wooden coffin of hexagonal style, which displayed decorative hardware including a metal inscription plate and handles. It’s hexagonal design (versus a simpler square one), its decorative hardware, and the “Mr.” inscription on the nameplate indicates Weir had some social standing.

“The coffin style suggested that Weir had a certain amount of wealth,” Vagelli said.

Unfortunately, despite her efforts, available resources could not determine this Thomas Weir's true identity, said Vagelli.