ABINGTON, Pa. — At least one of the 33 South Korean college students who spent four weeks taking classes at Penn State Abington discovered that Hollywood didn’t prepare him for the culture shock.

“I thought I was ready when we visited New York because of American movies. But it was even crazier than Seoul, where I come from,” said David Chung, a student at the University of Gyeongnam Geochang. “In New York, there’s all this activity all the time, and we heard people speak Chinese, Korean, English, Spanish — everything.”

“At first,” Chung said, laughing, “I thought the teachers and students might be scary, but I was wrong. We have all felt so welcomed here.”

“I will really miss my teacher,” she said. “I am getting over my shyness, and my English was really bad, but it’s getting better all the time.”

Chung, a social welfare major, hopes to return to Penn State and earn a teaching certificate, while Lee wants to pursue a nursing career, possibly in Boston where her uncle lives. 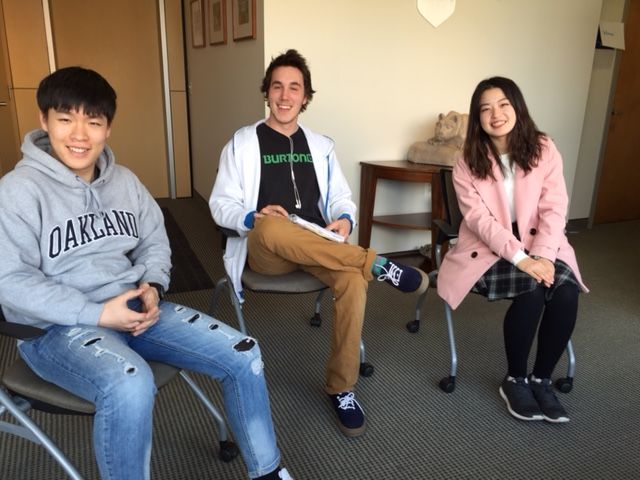 David Chung  and Yujin Lee flank their Penn State Abington buddy Mike Litzenberger. Chung and Lee spent a month at Abington in a rigorous English as a Second Language program.

“One critical component,” she continued, “is the opportunity for Abington students to engage with visiting international students in meaningful ways as team members, or Global Buddies, and conversation partners. The presence of international students translates into the opportunity for both groups to share their perspectives, create friendships, and deepen intercultural understanding.”

"It gave my friends the opportunity to experience American culture and study English in such an inviting and effective way.”

“When I went to Japan, I reconnected with the students I met here and had an amazing time learning more about their culture because our roles were reversed," she said. "I met people I would have never encountered otherwise.”

Paige Eberle, another Global Buddy for the South Korean group, said they bonded over playing games and comparing cultures — even roller coasters.

“I'm really proud to be a part of this program as well as our university, which gave me this opportunity to make some great new friends," she said. "And it gave my friends the opportunity to experience American culture and study English in such an inviting and effective way.”

Managed by the Abington Office of Continuing Education, the four-week program may be followed by another this summer.