What you can do with an English Degree?

Check out the wide range of English careers from Abington graduates.

Victoria is currently a graduate student in Temple’s English Ph.D. program. Her primary area of interest is 19th and 20th century American Literature, and she is also interested in digital humanities.In addition, Victoria is a Graduate Teaching Assistant in Temple’s First-Year Program. As an instructor of Analytical Reading and Writing, Victoria assists students in learning to differentiate between genres, analyze arguments, and view writing as a process. Victoria is currently working towards a Teaching in Higher Education certificate. In the future, she hopes to continue working with students and would like to further explore the study of texts as data.

Brandon Cherry works as a Supports Coordinator for a nonprofit organization in Horsham. He coordinates care and services for individuals with intellectual disabilities.

He uses skills learned as an English major by writing Individual Supports Plans for his clients, making sure individuals have the care and funding that they need to live a productive and fulfilling life.

Justin is a lecturer of English and African-American Studies at Penn State Berks.

He is also an American Studies Ph.D. candidate at the  State University of New York Buffalo, writing a dissertation on post-World War II police officers of color in New York City.

Maggie Eckles is a paralegal for the District Attorney’s Office in Summit County, Colorado.  She is responsible for managing all felony cases within the county.

Her daily duties include making sure all evidence for felony cases are obtained from law enforcement and witnesses, keeping track of defendant court dates, and drafting legal paperwork such as motions, orders, and complaints.

He spent his first ten years with the organization as an English teacher. MaST serves a diverse student body. Forty percent of students are identified as being from economically disadvantaged households.

Grant works with teachers, staff, students, families, and the community to support the students. In 2014, Grant joined Penn State Abington on a part-time basis as a lecturer in the Writing Program.

After completing her Schreyer Honors College thesis studying Stanley Kubrick through the lens of Aristotle’s Poetics, Angela Giannetta graduated from Abington with a degree in English and a minor in Women’s Studies.

Angela works within the Philadelphia Department of Prisons and has just accepted a position working with inmates housed in segregation units. Upon completion of her master's degree in social work, she intends to continue working with this underrepresented population.

Bekah Goodwin graduated from Penn State Abington with a B.A. in English and minors in Writing and Women's Studies. Bekah is currently studying at Arcadia University to obtain an M.F.A. in Creative Writing. They were also accepted into Arcadia's Wertime Scholarship Program to be a Graduate Assistant. Through the Creative Writing program, Bekah aims to complete a manuscript for publication. Their goal is to publish books that focus on social issues. For example, the manuscript for her graduate program is about a schizophrenic witch. She also wants to become a professor and open a bookstore.

Matthew has been employed as a TEFL-Certified Instructor of English in Prague, Czech Republic since his graduation in 2012. His daily responsibilities include creating and implementing study plans for a wide range of adult non-native English learners of all ages and skill levels. He also specializes in teaching Business English, Legal English, Medical English and Real Estate English, along with Cambridge Exam preparation. Additionally, Matthew provides training for effective presentations, preparation for corporate communication and external meetings, and cultural awareness. He is focused on gaining freelance experience in the technical writing field in the upcoming months.

He uses the analytical and communicative skills that he gained from his English courses to evaluate his students and give personal feedback to foster their learning skills. He also credits his interaction with students at Abington from a wide range of cultural backgrounds as good preparation for living abroad and stimulating his interest in learning several languages.

In addition to living and working in Prague, Matthew has travelled to over fifty countries and numerous regions around the world, including North America, Europe, Africa, the Middle East, Asia, Australia and New Zealand with plans to visit Russia, Ukraine, Turkey, China and South America in the near future.

Denell is currently a Compliance Coordinator for The Diallo Group and in the process of opening “The Diallo Academy," a CNA Vocational Training school. She is also studying for her MRA, Master’s of Regulatory Affairs, with a concentration in Clinical Research at The University of Pennsylvania’s Perelman School of Medicine. She has been able to apply tools gained from her English major immediately not only in her daily analysis of regulation, but also creatively as in her spare time she is developing an afrocentric short poetry collection.

Additionally, he conducts legal research, and he has drafted legal memoranda argued before the Pennsylvania Supreme Court and the U.S. Circuit Courts of Appeals.

A published novelist and poet, George devotes his creative energies to assisting writers as a freelance editor of fiction and memoir manuscripts. As a ghostwriter, he has been contracted to author blog posts, business articles, and short fiction.

A first-generation college student, Cassandra Modica graduated with an English major and minors in Writing and Women’s Studies. Post-graduation, she was accepted into Villanova University and earned her master’s degree in literature and a graduate certificate in gender and women’s studies in 2019.

Her research involves contemporary subaltern narratives, and she recently published her master's thesis studying the development of W.E.B. Du Bois’ notion of double-consciousness in Chimamanda Ngozi Adichie’s works. She engages in a practical complement to her scholarly pursuits through her full-time work as a mental health professional in the Philadelphia Department of Prisons, where she facilitates groups for inmates housed in segregation units.

A self-declared prison abolitionist, Modica continues to submerge herself in ally-work and engage in the discourse of prison reform.

Nick obtained his B.A. in English and Minor in Writing from Penn State Abington, where he also served as an editor for the Abington Review literary magazine. After graduating in May 2020, Nick began pursuing a Master's degree in Library and Information Science with the University of Pittsburgh. Anticipating the completion of his program in 2022, Nick has utilized skills he gained from his English and writing coursework at Abington to complete several projects for his graduate classes that he plans to use in his career as a librarian, including writing grant proposals for library programs, creating infographics for teen library users, creating data management plans, as well as writing reviews on popular works of fiction and nonfiction for adults and teens. Nick also writes short stories and is currently working on his first novel.

As a Graduate Assistant Writing Consultant, Amanda works and collaborates with peers and faculty to tutor and help students grow their skillsets and achieve both as writers and professionals. Additionally, as the Graduate Program Assistant to the Youth Empowerment and Urban Studies program, Amanda works to help organize and advise students on their course schedules, personal achievements, and urban outreach internships required to complete their YES minor.

Upon the completion of her M.A. program at West Chester University, Amanda seeks to pursue a Ph.D. in English and one day teach English and Writing Studies in a higher educational setting.

Victoria Ricci works at Merck on their North America supply chain team as a regional demand fulfillment planner. She is responsible for managing the finished goods inventory of a variety of pharmaceutical products, specifically within the 0 to 90-day horizon period.

Her previous roles include working first as a sales and marketing coordinator and then as an operations manager at Sesame Place. Victoria is enrolled in Gwynedd Mercy University and anticipates earning her MBA with a concentration in Strategic Management and Leadership in May 2020. 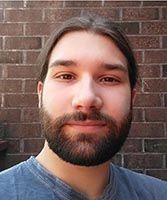 Samuel Santiago is an English Ph.D. candidate at Syracuse University. Specializing in screen studies, he researches the intersection of classic literature and video games with a particular interest in how canonical stories and their ideas re-enter the mainstream through modern pop culture. His current research questions the cultural position of Hell for its influence over social conceptions of morality and punishment, seeking to understand how that cultural position has evolved within interactive mediums such as games. After graduating, he plans to work as a professor, also striving to succeed as an independent writer, self-publishing essays online that encourage media literacy.

Rachael Shulman is a second year student at Washington University School of Law studying Environmental Litigation and Public Policy. In school, she is a board member of the Energy and Environmental Law Society and participates in local alternative dispute resolution.

She has worked in the public sector authoring briefs and performing legal research for the Michigan attorney general and Department of Environmental Quality. Post-graduation, she plans to work in international environmental policy in Washington, D.C.

The 2023 Application is Available