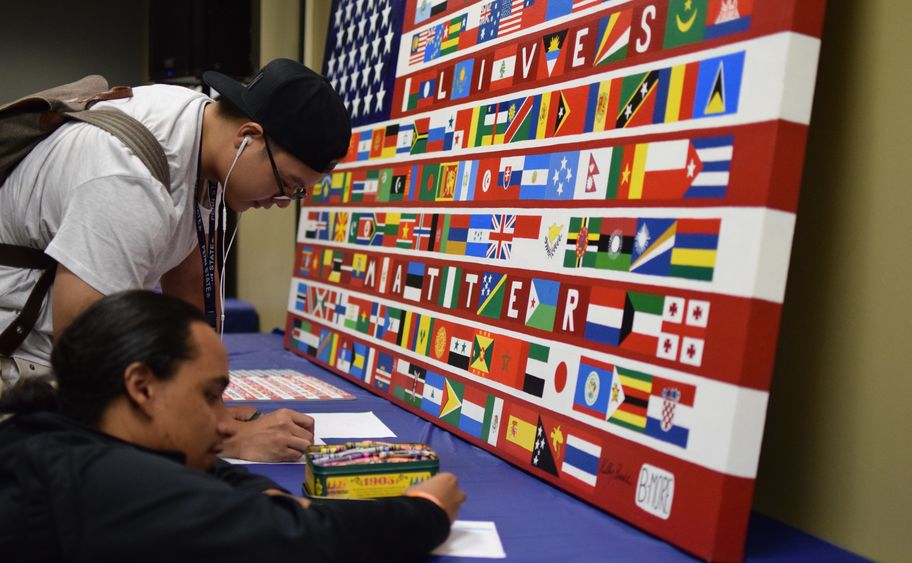 A Baltimore artist-activist led a day of encounter and conversation at Penn State Abington inspired by her Reimagined American Flags with themes of All Lives Matter, Black Lives Matter, and gun violence in America.

Jose Rodriguez manages Abington's Office of Diversity, Equity and Inclusion, and he introduced Kelly Burke with a reminder about the campus’s commitment to open debate.

“You are here to challenge yourself mentally and emotionally. We welcome both sides of the conversation,” he said. “We are here for the common good and in good faith.”

Burke said the violent protests that gutted her hometown in 2015 inspired the 9-foot by 4.5-foot paintings, which were displayed together for the first time at Abington.

“Baltimore, my city, was being torn up by riots. I had a desire to create around it, but I was a little bit like Colin (Kaepernick),” she said, referring the NFL player who won't stand for the national anthem. “What does it mean to me to be patriotic? I do have love for my country.” 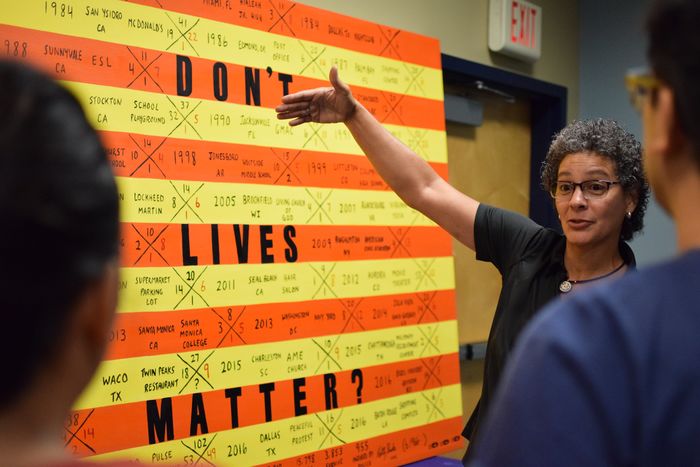 Artist Kelly Burke explains the icons in the Don't Lives Matter? flag to Penn State Abington students. It symbolizes lives lost through mass gun violence since she was born.

Burke said it took her about six months to develop the first piece, the intricate All Lives Matter flag with its smaller insets of 195 world flags.

“It’s a metaphor. We aren’t a melting pot, we are more like a salad bowl,” she said. “I wanted to convey our internal diversity.”

After considering the piece, she knew she "painted a a big elephant in the room, and so I kept painting the elephants."

She developed the Black Lives Matter and Don’t Lives Matter? pieces on the heels of All Lives.

"I believe in all three flags," she said. "Who is worthy to be in the flags? We are all worthy."

"Having all of the flags in this room makes you think about what's going on in this nation and how we should value each other." Penn State Abington student

A student asked Burke about her work and the simmering differences between the various Lives Matter supporters.

"The movements don't present a conflict for me," she said. "I didn't even know that Black Lives and All Lives were in conflict or which one came first." 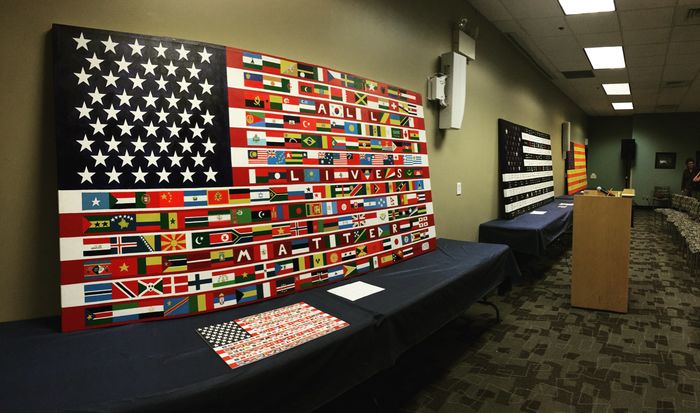 Penn State Abington is the first location — aside from Kelly's home studio — to host all three of Kelly Burke's award-winning Reimagined American Flags.

Burke wrapped up the day with a challenge: Use artistry and activism to stimulate conversations on patriotism and why and how we can more humane. She hopes it will solutions to make America safer for all.

"I want you to consider what being an activist would look like, what issue bothers you that you can't put into words?" she said. "Do it through painting, poetry, and music. We need more visuals instead of throwing words back and forth.”

A comment from one student suggested that Burke's merging of art and activism already has taken root at Abington:

"Is my life valued? Having all of the flags in this room makes you think about what's going on in this nation and how we should value each other," he said. 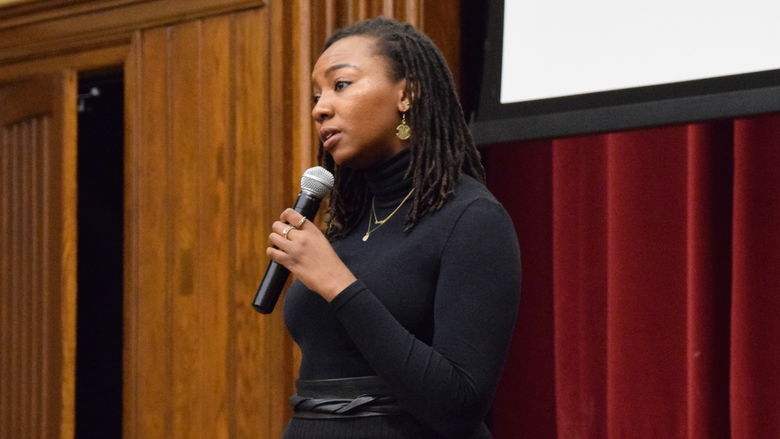 #Black Lives Matter co-founder 'vision for all' at Abington