Longtime mailman left his stamp on the Abington campus 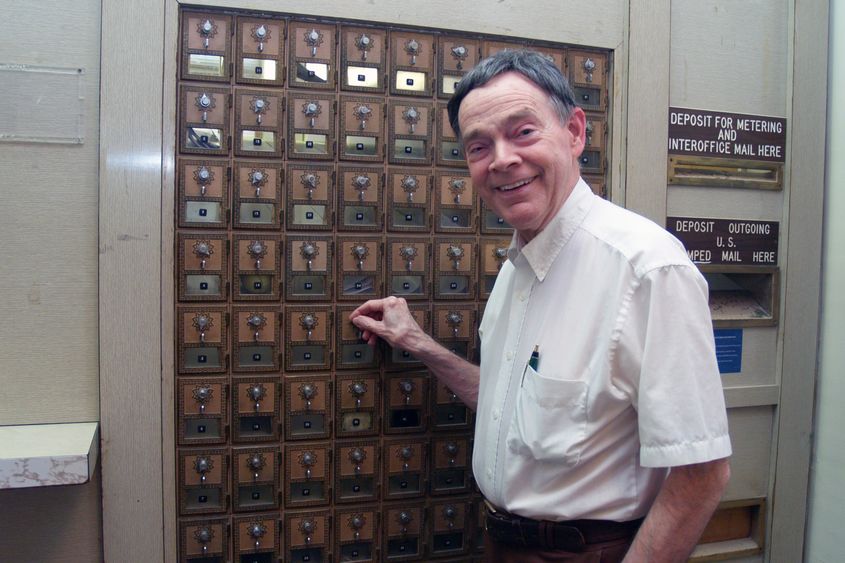 The historic Sutherland Building buzzes with activity, but for 23 years there was an oasis of calm amid the chaos. Tucked into an alcove on the first floor, Harry Felton manned the Penn State Abington post office with his mellow personality and a genuine interest in the people who comprise the campus community.

His easy smile made people slow down, say hello, and stop for conversation. Until his retirement last month, Harry was a steadying presence on the ever-evolving campus since his return in 1992.

Return? Yes, few were aware that Harry enrolled at Abington in 1956. He left for University Park in 1959 and returned 33 years later to run the post office.

“Abington provided me with an education and a career,” Harry said. “Everyone here was so nice all of the time. It’s not like other places where you work and not feel that atmosphere.”

Harry's primary responsibility was managing the pickup and delivery of mail. But in the week before he retired, the deliveries were for him -- cards, gifts, visits and a burst of Facebook farewells from as far away as Europe including these:

-- "I will miss him. I like him very much. He is a part of Penn State Abington. Good Luck, my dear friend Harry!" Max Walter, Hof University in Germany, Abington visiting scholar

-- "Harry was always genuine and caring. He always asked how I was and always remembered me by name. I don't know how they'll survive without him!" A graduate in Virginia

-- "The most beautiful human being I have ever met! A true gentleman. He was full of life, energy, and enthusiasm. Always greeted people with a contagious smile. You are going to be missed Harry!" Abington student

-- "NO!!!! STILL SO UPSET! I will miss him so much always an amazing help when we needed to send out tons of THONvelopes!! THANK YOU HARRY!:)" Abington THON Chair Melissa Aguilar

One student, Samuel Steiner, even wrote a farewell to Harry on the Lions Tales student blog: https://pennstateabington.wordpress.com/2015/01/29/a-tribute-to-harry-f….