About 230 Penn State Abington students processed to the classical sounds of "Pomp and Circumstance" on Friday, May 14, wearing their hard-earned blue caps and gowns. Some made it to the stage in four years, some took a little longer, but few can say they earned their baccalaureate degree within three years. Except Kevin Milligan, that is.

Milligan, 21, is no ordinary college student to take so little time to complete a bachelor of science degree in Information Sciences and Technology (IST). Milligan was a member of the University-wide Schreyer Honors College. By achieving academic excellence, conducting research and completing a thesis, and displaying an interest and aptitude for leadership, civic engagement and international experiences, Milligan earned the distinctive title of University Scholar. Chancellor Karen Wiley Sandler personally bestowed him with the Scholar's medallion on commencement day.

Quite an accomplishment for any student, but especially so for one with Asperger's Syndrome -- a high functioning form of autism. Social cues must be learned; they don't come instinctively to people with Aspergers. A wink of the eye, an understanding nod, a bit of sarcasm slip by unnoticed, making people with this form of autism a bit "quirky," to use Milligan's term.

According to Milligan he has struggled to overcome the obstacles of the disorder his whole life.

"This hindered my ability to pick up social cues, grasp abstract ideas, make new friends, and develop deep relationships with existing friends," said Milligan. "Even learning how to drive was a challenge due to the subtle social cues that need to be picked up on the road, for example, predicting the actions of other cars around me."

Perceived as being "different" in high school, Milligan was bullied by his peers. Fortunately, that all changed when he entered college. Milligan found acceptance and understanding at Penn State Abington.

"College has been wonderful for me," said Milligan. "Even though I still lived at home, I was able to adjust to things like changing schedules and getting my own transportation back home. Going on the Germany trip was a big step towards independence, since I lived in my own room and made my own way across the town. Of course, the internship I did was also an important preview of adult life, and one I handled well. All the same, I thank Penn State Abington for giving me another take on the school experience without the bullying."

According to Kevin's mother, Mary Helen Milligan, Penn State Abington was a fitting choice for her son.

"We are very pleased and very happy with Penn State Abington," said Mary Helen Milligan, "especially when Kevin first started there. He threw himself into extra curricular activities; which was huge; a wonderful thing. To a person, I don't think anyone could have been any nicer then they were at Penn State Abington. We were all very impressed with the faculty, staf, and student body. It was just a wonderful, wonderful experience."

During his time at Penn State Abington, Milligan completed the Abington Honors Program -- which included a thesis -- and became a member of the Phi Kappa Phi Honor Society. His thesis was on website usability and effective design using the Penn State Webmail system as the basis for his research.

According to Robert Avanzato, associate professor of engineering and Milligan's thesis adviser, Milligan is an outstanding scholar and researcher.

"What impresses me most about Kevin," said Avanzato, "is his ability to master a diverse set of technologies, which include Web design, programming, robotics, computer vision and 'green' technologies. He performs all of his work with a high degree of academic quality and professionalism. I am happy we were able to provide the support and academic environment for Kevin to succeed and achieve his goals. Kevin is a talented student and he was a pleasure to work with. I am confident he will be successful in his future endeavors."

Not only did Milligan keep his head in his books while at Penn State Abington, but he also took time to experience college life. He joined the Art club, serving as treasurer one year, as well as the Anime club, the Out-of Town club, Digital Art club and Graphic Design club. Milligan also participated in off-campus events, such as laser tag and mini-golf, sponsored by LEAP, the official campus entertainment and programming committee. He also was able to see a lifelong dream come to fruition by traveling to Germany, where he took classes and practiced the language during an embedded travel program in an IST course.

Fulfilling a degree requirement, Milligan completed an internship at Ballard Spahr, a law firm in Philadelphia He worked on redesigning their intranet site.

"I took the train into Center City everyday. Being on my own like that was a thrill; to be in the working world," said Milligan.

Milligan also has been busy "paying it forward." Having learned and developed coping skills to help navigate the social aspects of everyday life, Milligan has taught these skills to younger children dealing with Asperger's Syndrome. As a counselor at a summer camp for autistic children, Milligan helped the campers interact in ways that would be socially acceptable -- such as taking turns, speaking fluidly and reading facial expressions.

Milligan is looking forward to living on his own and has set his sights on a job in center city Philadelphia, preferably as a Web or software developer. Ultimately, his dream job would be to create a video game company.

"My biggest concern is being able to live on my own. I really have to pay attention to how things are done with mom taking care of me in everyday life, and dad too. I need to be able to do that for myself."

A job in Center City is a key component for Milligan's independence to be successful, due to the easy access to public transportation. Although he has his drivers license, Milligan prefers public transportation and has mastered the fine art of bus and train schedules with plenty of practice during his trip abroad to Germany, his internship in Philadelphia, and his daily commute to campus.

"A job in Center City would be good for Kevin," said Mary Helen Milligan. "He's good at getting around, navigating public transportation. He's fully capable of that. A job in the city would be the perfect next step. He would do very well on his own."

With the pomp and circumstance behind him, his gown and motor board packed away, Milligan, now an alumnus, offered advice to current undergraduates.

"Take school seriously, but don't worry. College is an opportunity. It's your chance to try whatever they have to offer. If you don't try, then you will never know if it fits you," he said. "Opportunity can then lead to commitment and fulfillment without regret." 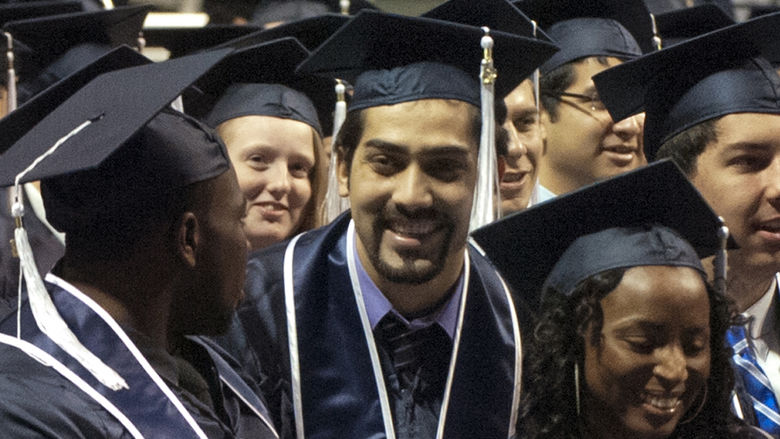