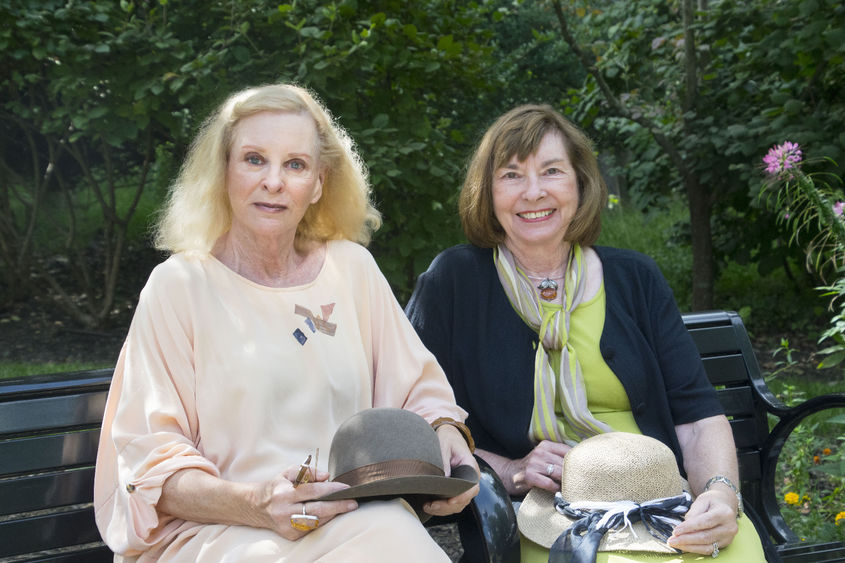 The Knodt/Miller English Recognition Award will be funded in perpetuity thanks to the generosity of the pair, who have been close friends for decades. Full-time students who will graduate with an English degree from Abington and have achieved superior academic records or manifest the promise of outstanding academic success within the major will be considered for the honor.

Each year, full-time English faculty will select the winner of the merit-based award, who will receive $1,000. According to Knodt, the award recognizes the student, not just a specific piece of work.

"In most cases, more than one faculty member has had the student, and they agree that the student is outstanding. Faculty come to a consensus,” she said.

"This award is a tribute to our love for Abington, for English, for each other, and the unusual trajectory of our relationship. It’s about how you can have an impact on someone else."

In the past, Miller had made personal gifts toward an English award, and she had initially planned to permanently endow it herself.

“Ellen and I have such a close alliance that I spoke to her about it, and she picked right up on it,” Miller said. “This award is a tribute to our love for Abington, for English, for each other, and the unusual trajectory of our relationship. It’s about how you can have an impact on someone else.”

The pair are professional collaborators whose relationship evolved into a personal friendship.

Miller and Knodt were first formally introduced at Abington, but their connection reaches back much further. Knodt was a student teacher at Miller’s high school in the Midwest, and Miller remembered her when they met as faculty members at Abington.

“You couldn’t really invent this. Ellen and I were talking in the office one day, and I said to Ellen, ‘I’ve seen you before,’” Miller said, laughing.

The pair bonded over their shared passion for students, teaching, scholarship and the similar paths their lives have followed.

"We had communion in both being young mothers starting out at Abington. We had sons within a year of each other and shared the trials, tribulations and joys of being an academic and a mother,” Miller said. “I consider her to be one of my best friends.”

Ernest Hemingway played a significant role in deepening their friendship.
Miller was already immersed in Hemingway scholarship when Knodt revealed that she was in possession of a letter the author had written to her father in 1948.

“Linda almost jumped out of her chair when I told her about it,” Knodt said.

Knodt’s father, Jack D. Andrews, was described by his daughter as an erstwhile writer and an admirer of Hemingway who owned all the author’s early books.

“My dad wanted Hemingway to write out a passage from ‘Death in the Afternoon,’ which was published in 1932. Hemingway did this and commented on his own passage,” Knodt said. “My dad died when I was in ninth grade, and I never had a chance to talk with him about Hemingway. I grew up with this letter on the wall in my dad’s study.”

“My dad’s letter brought Linda and me closer together. I wrote an article to explain the two points of view in the letter. I presented it at a conference, it was published, and I got hooked on Hemingway,” she continued, explaining that much of her Hemingway scholarship is interpretive.

Knodt and Miller both have roles in the internationally renowned Hemingway Letters Project, a projected 17-volume comprehensive scholarly edition of the author's 6,000-plus letters, 85% of which have never been published. Miller is head of the editorial board while Knodt verifies that transcriptions are accurate.

“Authors aren’t writing letters anymore. They are emailing, so having this treasure trove is remarkable,” Knodt said. “The content of his letters isn’t all about literature. He writes about hunting and fishing and money, and to his children and his sisters.”

Knodt and Miller are accomplished teachers as well as researchers. Both are recipients of the George W. Atheron Award for Excellence in Teaching, the University’s most prestigious award for undergraduate instruction. Miller served as the 2011-12 Penn State Laureate.

They take pride in the decades of work that has resulted in the dynamic English degree program at Abington, where the students are immersed in writing and reading and avail themselves of survey courses.

"It is one of the most usable majors. You learn critical-thinking, analyzing texts, and how to write. Writing is never easy, but it gets easier when you know the questions you need to ask. It’s a very intimate major, and we work directly with students,” Miller said.

Knodt finds excitement in Abington’s diverse student population and how they are exposed to each other’s ideas.

“In literature and composition classes, students share their work, and we have a lot of discussion. They learn from each other. We think alike even though we aren’t the same. And we disagree, and it’s OK,” she said.

This gift will advance "A Greater Penn State for 21st Century Excellence," a focused campaign that seeks to elevate Penn State’s position as a leading public university in a world defined by rapid change and global connections. With the support of alumni and friends, “A Greater Penn State” seeks to fulfill the three key imperatives of a 21st-century public university: keeping the doors to higher education open to hardworking students regardless of financial well-being; creating transformative experiences that go beyond the classroom; and impacting the world by serving communities and fueling discovery, innovation and entrepreneurship. To learn more about “A Greater Penn State for 21st Century Excellence,” visit greaterpennstate.psu.edu.