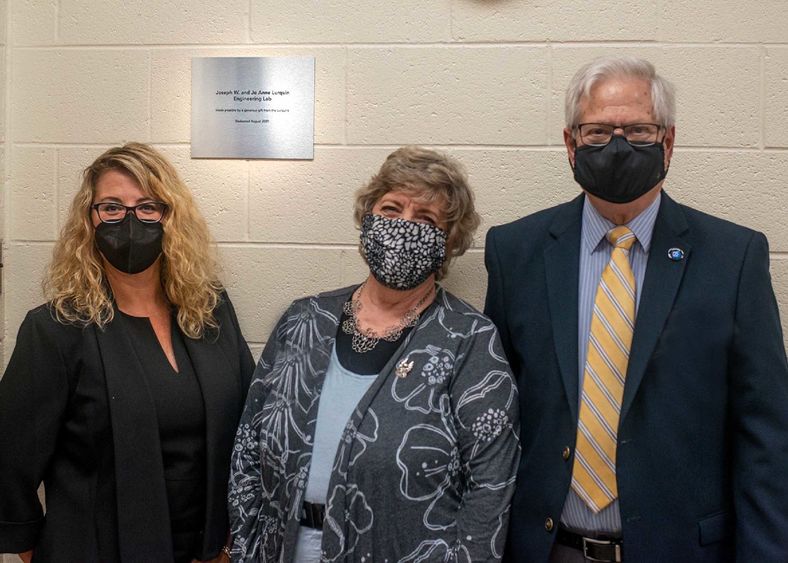 Standing at a lab bench during the naming ceremony, Joe Lurquin, 1971, said, “Jo and I would meet for lunch in the Hammond Building lounge when I was studying for my engineering degree at University Park. We agreed that when we were able, we would give back to the University so others could have the same opportunity to study and learn in amazing facilities.”

“We are thankful to donors like the Lurquins who are committed to investing in equipment and the infrastructure of the campus to provide students with a world class education that equips them to solve real-world problems,” DelliCarpini said.

Mukul Talaty, associate professor of engineering, explained that the Lurquin lab, home to the Engineering Design 100 course, is a cornerstone of the engineering experience at Abington.

"The course helps students understand the role of engineering design in improving the health, safety, and welfare of the global community. This is the course that we use to get students excited about what they can do when they finish their Penn State engineering degrees,” he said.

The Lurquins have been informed advocates and leadership role models for Abington for almost two decades after attending an open house on campus and being impressed by its growth. Joe Lurquin, who attended Abington in the 1960s, became a member and chair of the Abington Advisory Board and was able to meet students, staff and faculty. He joined Abington’s capital campaign committee and now serves as its chair.

Last year, the couple, who are also long-standing supporters of the Penn State College of Engineering, established the Joseph and Jo Anne Lurquin Educational Equity Scholarship at Penn State Abington.

In addition to supporting Abington campus students, Joe Lurquin also serves on the industry advisory board for the multidisciplinary engineering (MDE) major. It is a passion project for him since he retired in 2008 after a long career as an electrical engineer at Engineered Arresting Systems. He became a member of the MDE Industrial and Professional Advisory Council board to expand degree opportunities in engineering for students at Penn State's Abington and Brandywine campuses.

Students begin their MDE degrees at Abington or Brandywine and complete their coursework at Penn State Great Valley.

The Lurquins’ support will advance "A Greater Penn State for 21st Century Excellence," a focused campaign that seeks to elevate Penn State’s position as a leading public university in a world defined by rapid change and global connections. With the support of alumni and friends, “A Greater Penn State” seeks to fulfill the three key imperatives of a 21st-century public university: keeping the doors to higher education open to hardworking students regardless of financial well-being; creating transformative experiences that go beyond the classroom; and impacting the world by serving communities and fueling discovery, innovation and entrepreneurship. To learn more about “A Greater Penn State for 21st Century Excellence,” visit greaterpennstate.psu.edu.