The Penn State Abington Advisory Board, a group of professionals and community leaders who provide advice and support to the college, had been searching for an opportunity to honor former Chancellor Damian J. Fernandez. When Penn State announced its Educational Equity Scholarship Matching Program, the board decided to crowdfund a scholarship among its members and other donors associated with the college. 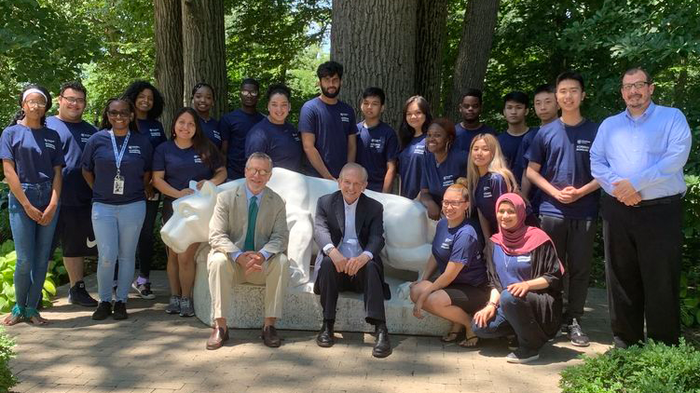 The result? The Damian J. Fernandez Educational Equity Scholarship at Penn State Abington, endowed with $50,000 in private support and $50,000 in matching funds from the University. The first student recipient of the Fernandez scholarship, which will continue in perpetuity, will be selected in 2021.

“Damian’s number one strategic priority at Penn State Abington was student success, and for many students the biggest barriers to success are financial. I am grateful to the members of the Advisory Board and the donors who made this scholarship possible,” Andrew August, interim Abington chancellor, said.

During Fernandez’s tenure as chancellor, the endowment for student scholarships increased by 250% to $7.4 million, which translates into nearly 250 more students being supported by scholarships.

Donors surprised Fernandez with the scholarship announcement during a recent Zoom event.

"It was my honor to work with such a committed community that wants to serve students who come from all walks of life. I could not have expected a better group of colleagues, and Penn State Abington will always have a special place in my heart," Fernandez said.

Patrick Ewing, an Advisory Board member, initially supported scholarships to promote diversity, equity, and inclusion among engineering students at Abington.

“When I was told I could have my gifts matched to provide greater impact across all majors at Penn State Abington, I jumped at the chance, especially when it would be part of the Damian J. Fernandez Educational Equity Scholarship. Dr. Fernandez’s passion for diversity and inclusion was a motivator for me to contribute to scholarships since I joined the Advisory Board,” he said.

Tina Vance Knight, director of the Center for Career & Professional Development at Abington, didn’t hesitate to support the scholarship drive.

“Dr. Fernandez’s commitment to issues of social justice and educational equity for underserved populations was both inspiring and motivational. When I attended Penn State, I was the recipient of the Bunton Waller merit/need-based scholarship, and I know the positive impact that had on my life, both personally and academically. Therefore, it is incredibly important to me to give back where I can, support fellow Penn Staters, and assist in helping Dr. Fernandez's vision become a reality,” she said.

Laura P. Clark, chair of the Advisory Board, said it is “fitting to honor Damian Fernandez with this scholarship that reflects his vision and leadership style. I stand proudly with the other contributors from the Penn State Abington Advisory Board and across our Penn State Abington community who so quickly mobilized and advanced this endowed scholarship in his name.”

Thirty-eight percent of Abington students are eligible for federal Pell grants, which means they display exceptional financial need, and 76% receive financial aid. Fifty percent of the approximately 3,700 students identify as members of communities traditionally underrepresented in higher education, and more than 40% are the first in their family to pursue a bachelor’s degree.

The recently concluded Educational Equity Scholarship Matching Program matched up to $10 million in scholarships created by Penn State alumni and friends that enhance the University’s ability to recruit and retain students whose gender, race, ethnic, cultural, and/or national background contribute to the diversity of the student body and who have a demonstrated financial need. Although matching funds are no longer available, educational equity scholarships will remain a priority for the University’s current fundraising campaign, "A Greater Penn State for 21st Century Excellence."

About A Greater Penn State
This scholarship will advance A Greater Penn State for 21st Century Excellence, a focused campaign that seeks to elevate Penn State’s position as a leading public university in a world defined by rapid change and global connections. With the support of alumni and friends, “A Greater Penn State” seeks to fulfill the three key imperatives of a 21st-century public university: keeping the doors to higher education open to hardworking students regardless of financial well-being; creating transformative experiences that go beyond the classroom; and impacting the world by serving communities and fueling discovery, innovation and entrepreneurship. To learn more about “A Greater Penn State for 21st Century Excellence,” visit greaterpennstate.psu.edu.