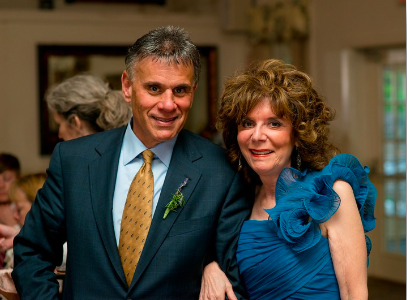 Hal and Randi Roloff Fair’s four-decade-plus love story started at Penn State Abington. She was a first-year student, he was a sophomore.

"We met in Spanish class in the Woodland Building. I still remember exactly where I was,” Hal said. “Abington is where we started our lives together.”

Hal, a 1978 communications graduate, said they enjoyed their time at Abington before they moved to University Park to complete their degrees. He was sports editor of the Abington campus newspaper and played intramurals and games of pinochle in the Lares Building while Randi, a 1979 education graduate, devoted herself to her studies.

They married in 1980 and moved to Newtown Township, Bucks County, with Randi staying home with their children while Hal forged a career in sales. Randi later earned a nursing degree and worked as a school nurse, becoming a beloved resource for children at Herbert Hoover Elementary in the Neshaminy School District for 21 years. She retired several years ago after being diagnosed with a rare disease.

Now the Fairs' legacy of love will continue in perpetuity at Abington with a $25,000 scholarship Hal established just weeks after Randi died from amyloidosis.

“We discussed this scholarship and decided on it together,” Hal, regional vice president for Conair Corp., said. “This is a memory of her that will go on. Because we met at Abington, Penn State is an important place for both us.”

"We are very grateful to Hal Fair for establishing this scholarship in memory of his wife, Randi, which will be an everlasting legacy supporting the education of Penn State Abington students for years to come," Andrew August, interim chancellor, said.