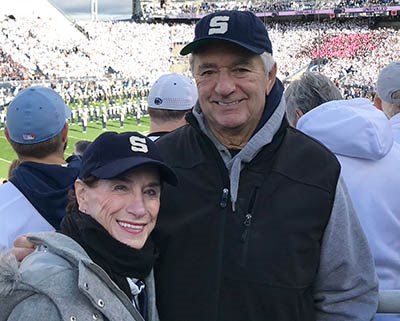 Penn State Smeal College of Business alumnus R. Bruce McKee and his wife, Lucille, recently made a $1 million estate commitment to the University.

The McKees’ gift will be split equally between two funds.

The first, the Robert Bruce and Lucille D. McKee Scholarship at Penn State Abington, is an existing need-based scholarship for academically gifted students enrolled at the campus who are studying accounting or finance.

The second is the Robert Bruce and Lucille D. McKee Excellence Fund in the Smeal College of Business, which will provide discretionary resources to support curriculum development, extracurricular programming and other opportunities as they arise for Smeal’s Department of Accounting.

The McKees will make an annual $100,000 gift to the University, effectively reducing their estate commitment and allowing them to see the benefits of their philanthropy while they are still living.

“I feel like I owe something to Penn State,” Bruce McKee said. “This is our way of saying thank you.”

Bruce McKee attended two years at Penn State Abington (formerly Penn State Ogontz) before transferring to the University Park campus, where he was active with the ROTC. He graduated with a degree in accounting in 1966 and began his career in the Philadelphia office of a national accounting firm.

Five months after he started at the firm, he was called to active duty. He spent two years in the U.S. Army, including a year in Vietnam. When he returned home, he said his girlfriend, Lucille Drioli, handed him a calendar and told him to “set the date.”

The couple got married shortly thereafter and have been together for more than 50 years. They’ve raised three children together.

When gambling was legalized in New Jersey in the late 1970s, Bruce McKee left public accounting to join the gaming industry. He spent close to 20 years working in Atlantic City, including 10 years with the Trump organization where he was president and chief operating officer of Trump Taj Mahal Associates LLC, Trump Marina Hotel Casino, and chief financial officer of Trump Hotel and Casino Resorts Inc.

As gaming expanded across the country, he was named executive vice president and general manager of Midway Slots and Simulcast, located in Harrington, Delaware. He retired as president and CEO of Firekeepers Casino Hotel Resort in Battlecreek, Michigan, an enterprise he said he was proud to help build from the ground up.

He said that Penn State laid the foundation for his success.

“The University pointed me in the right direction. The work ethic I learned there is something that served me well my entire life,” he said.

He received the Penn State Abington Alumni Achievement Award in 2020.

“Bruce and I were fortunate to be able to afford college for our three children,” Lucille McKee said. “It feels wonderful to be able to give this gift so that less fortunate students can attend college with less worrying about how they can afford it.”

Margo DelliCarpini, chancellor at Penn State Abington, said that the McKees’ support for students in Abington's new four-year accounting degree is extraordinary in its generosity and impact.

“Their gifts, along with the philanthropic partnership of many other generous donors, help Penn State Abington fulfill its land-grant mission toward opening doors to a world-class Penn State education," she said.

“Excellence funds like this are among our most valuable assets,” he said. “The McKees’ generous commitment will allow our Department of Accounting to immediately direct resources where they are needed most.”

The McKees said they were thrilled to be in a position to support Penn State.

“We saw a need that we could fill,” they said. “Our goal is simply to help students achieve what they are aiming to do at Penn State.”

Gifts to the University will advance "A Greater Penn State for 21st Century Excellence," a focused campaign that seeks to elevate Penn State’s position as a leading public university in a world defined by rapid change and global connections. With the support of alumni and friends, “A Greater Penn State” seeks to fulfill the three key imperatives of a 21st-century public university: keeping the doors to higher education open to hardworking students regardless of financial well-being; creating transformative experiences that go beyond the classroom; and impacting the world by serving communities and fueling discovery, innovation and entrepreneurship. To learn more about “A Greater Penn State for 21st Century Excellence,” visit greaterpennstate.psu.edu.